ANN ARBOR, Mich. — Merit Network today announced the completion of the REACH-3MC fiber-optic infrastructure project, which has built 2,287 miles of fiber-optic infrastructure across Michigan and in parts of Minnesota and Wisconsin. Engineers have finished splicing the remaining fiber in the Keweenaw Peninsula, connecting community anchor institutions in Hancock and Calumet, Michigan.

“With this last effort, all of the community anchor institutions are now connected to the network,” said Bob Stovall, vice president of network operations and engineering for Merit.

Merit has connected 141 community anchor institutions, which includes schools, libraries, health care, government, and public safety. 70 additional organizations were also connected to the network by constructing last-mile fiber to the network. Each connection is a minimum of 1 gigabit-per-second (Gbps), providing broadband speeds to previously unserved or underserved parts of Michigan.

“We are very proud of this tremendous accomplishment,” said Don Welch, president and CEO of Merit. “The REACH infrastructure will provide real benefit to our members and Michigan for many years. Personally, this will be something I can look back on and feel that I have really made a difference.”

Construction on the REACH-3MC project started in December 2010, and at its peak, 40 construction crews were working simultaneously in parts of Michigan. Work on Round I of the REACH-3MC project in the Lower Peninsula was completed in April 2013. With the lighting of the remaining Round II fiber, Merit has completed 2,287 miles of fiber-optic infrastructure, which is the equivalent of travelling from Ann Arbor to Orlando, Florida.

Merit now has redundant 10 Gbps routes in the Upper Peninsula that provide reliable connectivity to public universities, private colleges, K-12 institutions, health care organizations, libraries, and more. In addition, there are now three exit routes for traffic in the Upper Peninsula: through Superior, Wisconsin; through Green Bay, Wisconsin; and across the Straits of Mackinac to Mackinaw City.

In the Lower Peninsula, there is now significantly more fiber available. The southern and western counties now have fiber-optic infrastructure from Monroe to Berrien Springs to Traverse City and Mackinaw City. Northern counties that were previously underserved now feature redundant fiber routes, stretching along the sunrise coast of Lake Huron and across to Gaylord, Grayling, Houghton Lake and Indian River.

“The Upper and Lower Peninsulas now have more opportunities. The project has made communities, like Hillsdale, a hub of opportunities. Hillsdale was once a remote location with limited connections. The community now has four fiber connections,” Stovall said. “We also built a 1 Gbps fiber ring around Lake Charlevoix, which benefits Boyne City, Charlevoix, and East Jordan. There are now two paths out of Charlevoix, which create a resilient, high-capacity network for future growth. This project is a foundation for Michigan, much like the interstate highway system. More work is needed to truly reach every community in Michigan. More laterals are needed to connect more communities to the REACH-3MC infrastructure.”

As part of the economic development component of the project, Merit worked with seven commercial providers to provide service to homes and businesses along the REACH-3MC routes. ACD.net, Boardman River Communications, Great Lakes Comnet, Lynx Network Group, Packerland Broadband, Peninsula Fiber Network, and TC3.net participated on the project and own strands of fiber on the REACH-3MC network.

After almost four years of hard work and dedication, Merit has increased its fiber-optic backbone by 59 percent, growing from 1,700 miles to over 3,900 miles. Merit’s network supports the needed bandwidth requirements for K-12 education, higher education, health care, government, and other non-profit organizations.

“This is an exciting opportunity for Michigan,” said Elwood Downing, vice president of membership outreach and engagement at Merit. “It has been extremely rewarding to work with so many communities across the state and to see how this infrastructure has improved the quality of life within the communties.” 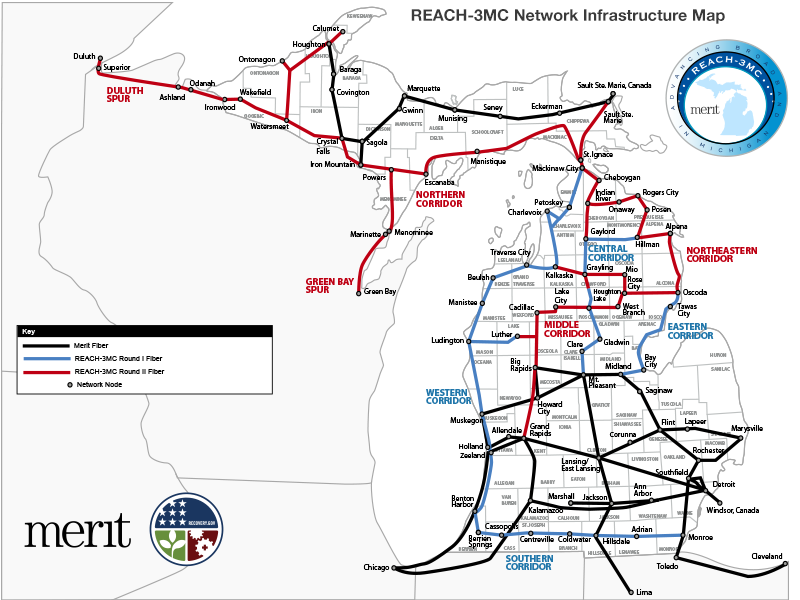 The REACH Michigan Middle Mile Collaborative (REACH-3MC) will build 2,287 miles of open-access, advanced fiber-optic network through rural and underserved communities in Michigan’s Lower and Upper Peninsulas. The network will also provide backhaul to key connection points in Wisconsin and Minnesota. Led by Merit Network, Michigan’s research and education network, REACH-3MC includes sub-recipients from the private sector to make broadband readily available to households and businesses that lack adequate service options in the 52 counties that make up the project service area. REACH-3MC is funded by a two grants (Round I and Round II) from the Broadband Technology Opportunities Program (BTOP) as part of the American Recovery and Reinvestment Act of 2009 (ARRA), commonly referenced as the Stimulus Package.

[meritmediacontact]
Recent Blogs
STAY UP TO DATE WITH MERIT